May the Fourth Be With You…Always

I originally published this blog post in 2016 and thought it worth recycling today (May 4th).

I am a huge Star Wars fan.  And, as you’l read below, I love the music. I have a copy of the album from the most recent movie, The Last Jedi, and already have my favorites from that work (Acho-To Island; Lesson One). The discussion below reviews one of the most important musical motifs in the series. 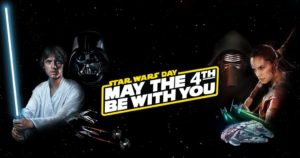 Think of Star Wars. The movie that came out in 1977, the original film that started it all.

Now think of that movie without the music.

Can you do that?

For me, it is impossible. Star Wars as a movie and as a movie franchise is forever entwined with its music. The 1977 score is so iconic that it has been heralded as the best movie score of all time. I can’t argue with that.

I love that score. I listen to it all the time. I know the little motifs, I can see in my mind the action on the screen as it is wedded to the music.

Music also ties the movies together, despite changes in time and characters. We can hear the Force theme in the Original Trilogy and the Prequels and now in The Force Awakens.

In early 2016,  bought a copy of the score from The Force Awakens. There was a particular musical moment I really wanted on that album. But it wasn’t there.

And it’s probably the most important musical moment in the entire film because it reflects another crucial moment. I suppose they kept this musical tidbit off the album to prevent spoilers, but I’m really angry not to have it.

And spoilers ahead if you haven’t seen The Force Awakens.

One of the most important scenes in Star Wars (1977) (and not just that movie but the entire series of films) is when Luke rushes back to his home to discover it smoldering and his aunt and uncle murdered. Until that point, he is interested in Obi Wan’s tales but not interested in going on “some damn fool idealistic crusade.” He knows his place and that place is with his family on Tatooine, helping on the farm. But when he sees his world is destroyed, he knows what he must do and makes a choice to go with Obi Wan and be trained as a Jedi.

In this video we first hear the Force Theme as he comes upon the disaster then, at approximately nineteen seconds in, we hear the Dies Irae (Day of Wrath). On the original Star Wars soundtrack, this track is “Burning Homestead.”

This motif (Dies Irae) is from a Requiem Mass. It is a motif of death, rebirth, tragedy, new beginnings. And guess where it shows up in The Force Awakens?

When Rey calls the Skywalker lightsaber to her. The Force Theme leads into the Dies Irae.

It is the same piece of music. I later read that although the original score was what is on the soundtrack, they took the 1977 score and simply added it later.

And here is that wonderful scene. The Dies Irae is at 28 seconds into this clip (sorry about the ads), about a second before Rey ignites the lightsaber.

There has not been a death (although Finn has been gravely wounded), but it is the point where Rey makes her choice to embrace her identity as a Jedi. Remember she ran–literally–when offered the Skywalker lightsaber. She had her vision upon touching it, was terrified, was given the choice, and fled.  But there in the snow, alone with Kylo Ren, she calls the weapon to her whereas her opponent cannot.

That is the most important scene in the movie in my opinion. Not when she defeats Kylo Ren, but when she makes her choice. Her old self dies away, leading to her triumph.

May the Fourth Be With You.

Fun and Free For You

A Springtime Trip on the Bluegrass Railroad