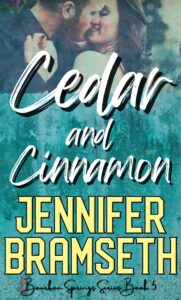 Harriet Hensley and Goose Davenport don’t share much in common–or so people think. But after one wonderful, secret night, forces conspire against them and they’re not allowed to see what happens next. Years later, can they pick up where they left off?

Cedar and Cinnamon is the fifth book in the Bourbon Springs Series of contemporary romances.

Give it All We Got Tonight by George Straight

You Don’t Run Across My Mind by Irene Kelley