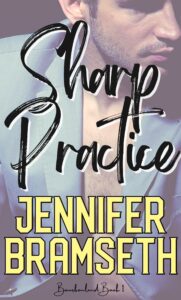 Nina Cain always thought she’d end up with Judge Garner Robson, the well-connected descendant of a former governor. But Nina’s vision of her future was shattered after a bitter breakup, followed by Garner’s quick marriage to another woman.

Then tragedy strikes. And Garner returns to her a chastened, lonely man.

As she struggles to resolve her feelings for her former love, Nina is also handling the biggest case of her career. A prosecution in which one of Garner’s powerful family friends is her opposing counsel. And that family friend is not below using Garner to help him win the case.

Sharp Practice is the first book in the Bourbonland contemporary romance series.

next work: Stave and Hoop ⇒