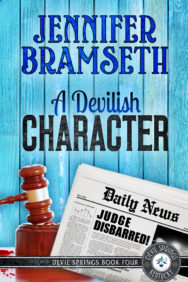 Disbarred former judge Buford Blankenship was the worst attorney Greer Galloway ever prosecuted. Now the supreme court has appointed her as special counsel in his quest to be re-licensed. It’s a tough, time-consuming task on top of her regular job as Bain Circuit Court Clerk.

There’s no shortage of people who hated Buford and don’t want to see him get his law license back: an ex-wife, a former law partner, and the judge who replaced him on the bench. Not to mention Greer herself. When a key witness disappears, it looks like Buford is on his way to being a lawyer again. But when someone else goes missing, the entire case is thrown into deadly, devilish chaos.

A Devilish Character  is the fourth book in the Devil Springs Cozy Mysteries Series.

next work: A Devilish Choice ⇒